The full judgment can be viewed here. 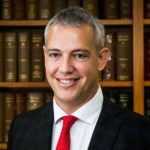 North Quarter Lane Chambers is one of the largest and most experienced commercial barristers' chambers in Queensland.